Creative Tactics: How Imagination Can Give You A Competitive Edge 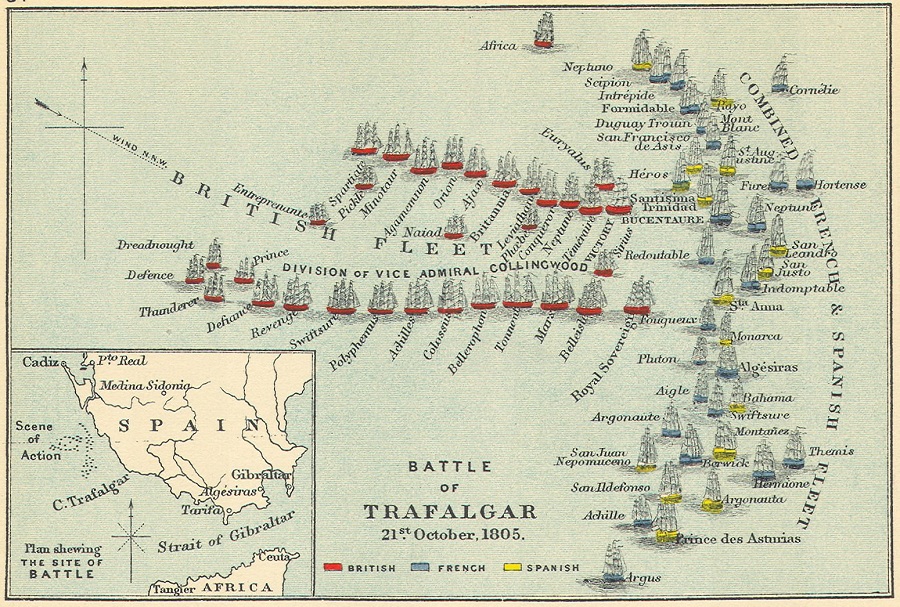 One of my longstanding gripes is the notion that creativity and art are inseparable, something that tends to deter a great many people from exploring how to become more creative. In fact, they are very much separable – to the extent that, in my view, most art is not creative and most creativity happens outside art.

I’ll leave the bashing of uncreative contemporary artists aside this time and simply point to how something as far from art as seems possible can contain a moment of high creativity, even – considering how high the stakes were – of creative genius.

I speak of Horatio Nelson’s tacticsat the Battle of Trafalgar in 1805. Traditionally, opposing fleets would line up sideways-on to one another and in essence engage in a war of attrition, firing at each other for hours until one side sustained losses that were too heavy and retreated.

Nelson had other ideas. He first told of his radical new plan when at home in Merton Place talking to his colleague Captain Richard Keats. Keats would later relate the conversation toEdward Hawke Locker:

[Nelson] said to me, “No day can be long enough to arrange a couple of Fleets and fight a decisive Battle according to the old system. When we meet them…for meet them we shall, I’ll tell you how I shall fight them. I shall form the Fleet into three Divisions in three Lines.

One Division shall be composed of twelve or fourteen of the fastest two-decked Ships, which I shall keep always to windward, or in a situation of advantage; and I shall put them under an Officer who, I am sure, will employ them in the manner I wish if possible. I consider it will always be in my power to throw them into Battle in any part I may choose…

With the remaining part of the Fleet formed in two Lines, I shall go at them at once, if I can, about one-third of their Line from their leading ship.”

He then said, “What do you think of it?” Such a question I felt required consideration. I paused. Seeing it, he said, “But I’ll tell you what I think of it. I think it will surprise and confound the Enemy. They won’t know what I am about. It will bring forward a pell-mell battle, and that is what I want.” [1]

So Nelson would drive straight at the enemy (in this case, Napoleon), which entails a significant risk. It would expose his fleet to fire when they wouldn’t be able to fire back – ships fired from the sides, not front.

Nelson tells us in his own words how other officers reacted when he told them of his plan:

I believe my arrival was most welcome, not only to the Commander of the Fleet, but also to every individual in it; and, when I came to explain to them “the Nelson touch,” it was like an electric shock. Some shed tears; all approved – “It was new – it was singular – it was simple!”; and, from Admirals downwards, it was repeated – “It must succeed, if ever they will allow us to get at them!” [2]

The bottom line is that it worked. Nelson lost none of his 27 ships whereas Napoleon lost 18 of 33, and was defeated (though Nelson famously died). The daring approach must have made victory that much sweeter.

Creative ideas are simply ideas that are new, valuable and non-obvious, in any field. It also applies to ideas which are not images or designs or concepts. An aphorism is an idea, as is a deception, a clever retort, astrategy– or a tactic.

Nelson hatched then implemented an idea that was creative by all the necessary criteria. What’s more, he risked defeat including the death of many including himself and ultimately his country, if he failed. Such pressures probably explain why the more reliable battle technique had reigned supreme for so long, and why Nelson’s new plan felt like “an electric shock” to those he told beforehand. You wouldn’t think of a stuffy old military figure as a revolutionary, but you could call this Punk Warfare – radical, fast, brutal and effective.

As a professional, a leader, a decision-maker or just a human being, you use tactics routinely to achieve your goals. It’s vital to grasp how creativity can be a powerful tool in your arsenal here. Whether making a move in chess or thinking of a novel solution to a work problem, whether playing the game of romance or doing an actual sport, the use of tactical creativity can separate you from your competitors and even lead you to break new ground in your field of interest.

[1]See footnote 9, at pages 241-2, of The Dispatches and Letters of Vice Admiral Lord Viscount Nelson, with Notes by Sir Nicholas Harris Nicolas, Volume 7, August to October 1805.)